Feast in the Middle East 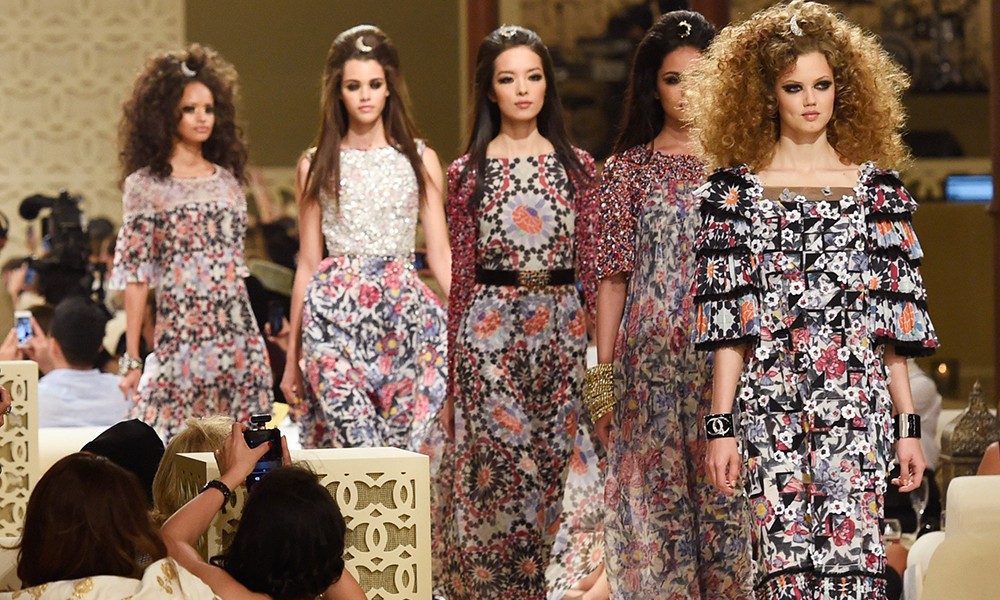 With just a few days until Eid or hours before a family wedding, the wealthy women from Qatar, Saudi-Arabia or Dubai don’t hesitate when they purchase a £ 20,000 pound couture gown by Valentino or Chanel. While they are putting large sums of cash over the counter, these women won’t forget to accessorize their look with a pair of golden earrings or a diamond clutch. Globally Muslims spend about £ 150 billion pounds/ €200 billion euros on clothing and footwear, states a 2013 report of Thomas Reuters. The report also notes that the figure is expected to rise up to £ 319 billion pounds /€ 430 billion euros in 2019, mainly coming from wealthy families in the Middle East. Luxury ‘Western’ fashion brands responded quickly to this trend by offering their most luxurious couture gowns and by opening stores in Dubai, Qatar and Doha. Women from the Gulf region are now one of the biggest buyers of luxury fashion.

Many oil-producing states in the Middle East like Saudi-Arabia, Iran and Qatar, saw major economic growth from 1965. This was the time when the Arab-Israeli war and the Iranian revolution were in full swing, which led to the quick rise of oil prices. As the Middle Eastern men and women became wealthier, their life expectancy rose, school enrolment went up and adult literacy grew. In an effort to continue growth and reduce their reliance on oil revenues, the region  developed alternative economic sectors, as tourism, banking and agriculture. With the departure of European powers at the end of the 1960s, particularly France and the United Kingdom, it was the official start for a modern Middle East.

Grandeur haute couture
As the economy in the Middle East grew, the fashion industry quickly followed. Designers like Elie Saab, Reem Acra and Razan Alazzouni gained international success and the cities Dubai, Tel Aviv and Doha were able to launch their own successful fashion weeks. Even the magazine market flourished; Harper’s Bazaar Arabia launched in 2007, Marie Claire Kuwait in 2008 and Style.com/Arabia in 2012.
One of the driving forces behind all this was the Chalboub family, who were one of the first to import ‘Western’ fashion brands  like Chanel, Marc Jacobs and Céline into Syria and later Kuwait and Lebanon. Giant shopping malls like The Dubai Mall and The Persian Gulf Complex now hold many luxury brands. But some women would rather spend their money on a tailor-made haute couture gown, with prices that can go up to £ 35,000 pounds /€ 47,000 euros. “Fashion is very important in the Arabian culture,” said Nouriah Al-Shatti, fashion editor of Kuwait’s Style magazine in an interview with Glamour. “Whether they go to a party or do grocery shopping, Kuwaiti will never leave the house without wearing something beautiful. Especially the busy wedding calendar makes their life a fashion playground, it could be compared to a red carpet event,” she said.
Every year these women have about fifteen to twenty weddings to attend, which could easily take up to three to seven days each. Generally, during a wedding, men and women are split up into separate groups whereby women can show off their luxurious dresses, some not afraid to show a bit of cleavage or to wear transparent fabrics. “I had the opportunity to see a wedding that was recently held here in Dubai,” said Simon Lock, the creative director for Dubai Fashion Week in an interview with Reuters. “ 4,000 women were invited to the reception and everybody in the room was wearing haute couture. And there are lots and lots of weddings to attend. The wedding season is very expensive here. I have known of many occasions when a couturier will be invited to a private home for a showing. The hostess will buy maybe twenty, thirty couture outfits for a season,” he said.
Besides the wedding season these women also need a spectacular outfit for the many Gala’s, parties  and Eid, the festive day that marks the end of Ramadan. They don’t shy away from £ 35,000 price tags and only go for the most luxurious, exclusive dresses. Reem, the daughter of a major construction tycoon in the Middle East, told Reuters that she regularly buys unique couture dresses because she wants to be different from others. “What I want is unique pieces, extravagant and chic. I do not want to pay 5,000 or 6,000 euros for a dress, as it happened to me with a Pucci outfit recently, and see it on somebody else the same evening,” she said.

From East to West
Designers are very inspired by their ‘new’ demanding customer and determined to meet their wishes. Oscar de la Renta launched a line of richly embroidered caftans in the region and DKNY a Ramadan collection that was styled by the Middle Eastern fashion personalities Yalda Golsharifi and Tamara al Gabbini. Even the big manufacturers and retailers like Net-a-Porter, Zara and Mango offer special collections for Eid, since this is the time of year where Middle Eastern women will spend most of their money on luxury fashion.
In May 2014 the international fashion press and celebrities like Tilda Swinton, Vanessa Paradis and Dakota Fanning were flown in to see the latest Chanel 2015 cruise collection in Dubai. The guests were seated on oriental sofa’s and pillows with a view on the Burj Khalifa tower, the tallest building in the world, standing at 829,8 metres. Lagerfeld’s line was clearly inspired by the region, showing long tunics, harem trousers, babouche slippers and even a bag in the shape of a jerry can.
“The prints are inspired by… [Read the entire article in Freya magazine]

Written by: Marloes Hagenaars
Image by: Olivier Saillant for Vogue