Islamic sportswear on the rise 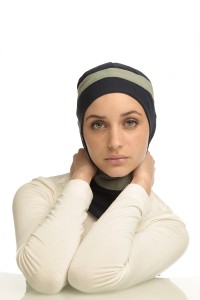 For many women, wearing Islamic modest clothing while working out has long been a struggle and kept them from going to the gym or participating in team sports. It has only been a couple of years since garments like the burqini (2004) and the sports hijab (2001) made their first appearance on the market.  “There is a trend where Muslim women are more aware of their health and body,” says Cindy van den Bremen, designer and founder of the Islamic sports brand Capsters. This trend, which is encouraged by the lift on the hijab ban by FIFA in 2014 and the participation of Muslim women from Saudi Arabia, Qatar and Brunei in the 2012 Olympic Games , led to a growing amount of Muslims participating in sports.
According to the Active People Survey that was held by Sport’s England in 2012, only 18% of the female Muslim population in the United Kingdom participated in sports, as opposed to 47% of the male Muslim population. A year later the female involvement in sports increased with 13,8%, especially amongst the Muslim community.

Ready, set, go
The London Olympic Games in 2012 broke some serious records and had a major influence on the rise of Muslim players in sports. Saudi Arabia, Qatar and Brunei have all sent female Muslim athletes to the Olympics for the first time. The Saudi judoka Wojdan Shaherkani was only 16 when she competed and hijabi sprinter Tahmina Kohistani from Afghanistan competed in the 100m sprint for the first time. Despite the fact that the Olympic Games were held during the holy month of Ramadan, it marked the highest participation of Muslim athletes ever, with over 3000. People from all over the world saw how athletes like the Somali Zamzam Mohamed, Yemen’s Fatima Sulaiman and Saudi Sarah Attar competed while wearing modest sport attire. “It was such a great honour that we were allowed to participate this year,” said Sarah Attar in an interview with CNN after finishing her 800m race. “I think this could be something amazing for the women in Saudi-Arabia and we can really push through to make a difference.” After all, it was only in 1936 when Halet Cambel from Turkey was the first female Muslim athlete to compete during the Olympics and in 2004 Ruqaya Al Ghasara was the first female to compete while wearing hijab and being fully covered. Sarah Attar and many other Olympic athletes in 2012, inspired Muslim women from all over the world to get involved in sports.

Designer Cindy van den Bremen thinks that the Olympic Games certainly had some sort of influence but that it’s just one of many factors. “The Olympic Games are part of a bigger movement. In the Middle East for instance you will find a group of self-aware, highly educated women who compete in triathlons and duathlons or want to do the Iron Man triathlon, which is very inspiring to others. These women show that wearing a hijab doesn’t have to be an obstacle. Another great example is blogger and fitness guru Nadoona (Nadine Min Falestine) who started exercising and eating healthy because she was discontent about being overweight, ” says Cindy. The designer of Capsters is very passionate about the Islamic sports branch and Capsters is the first company to provide Muslims with comfortable, lightweight sports hijabs, made from Lycra, stretch cotton and polyester. “Back in 1999 I graduated on a series of sport hijabs because a girl got expelled from gym class due to her supposedly unsafe hijab. In court it was decided she could wear a turtle neck with swimming cap instead, since that would cover the same areas. It made me realize it was not about the covering, but … [Read the entire article in Freya magazine]