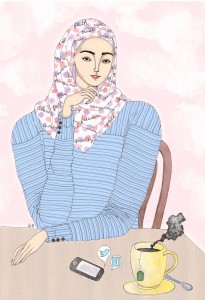 Each issue Freya magazine will start a conversation about feminism. This time, Nadiya Takolia, Scriptural Reasoning Co-ordinator at Cambridge University, talks about the relationship between feminism and Islam. For over a year and a half she’s been working for the Inter-faith Programme, which was established to pursue research and public education projects that brings Jewish, Christian and Muslim participants and others together. It was four years ago when Nadiya adopted the headscarf as part of a modest dress style. But this decision was not necessarily related to her faith. “My thinking was that if society expects me to uncover then I’m going to do the opposite,” she says. Nevertheless, her political and feminist decision made her think more about Islam and brought her closer to the faith.

It’s very crowded when I pick a seat at the Wash House Café in Westminster. Men in black business suits are having a heated discussion while a couple of students across the room enjoy their lunch and catch up with old friends. When Nadiya walks in, soaking wet umbrella in hand, she smiles and waves at me. She is wearing a black and white blouse combined with a light blue scarf that is tied at the back of her neck. Nadiya’s high energy and bubbly personality quickly shine through as she passionately starts speaking about the role of women in society today and her relationship with Islam.

What is feminism according to you?
“I don’t really like the word feminism, I prefer the term feminisms because I think it manifests itself so differently in different contexts. I see it broadly as increasing opportunities for women, standing up for their rights and freedom of choice. For me it mostly relates to the fact that women have always been second-class to men and are still second-class even though we live in a modern developed country. Feminism is a term that addresses some of these issues.”

Some might feel that being a Muslim and feminist is a contradiction, what do you think is the biggest misconception about this?
“The most wide and common perception is that a Muslim woman can’t call herself a practising Muslim and a feminist. I think it’s a misperception but explaining it is complex and layered. There are some Muslim women who reject the term feminism because of its Western, colonialist connotations whilst others embrace it wholeheartedly. I feel that there are many areas where Islam and feminism overlap, for instance women’s rights to education, protecting women from physical abuse, and enabling their free will and determination. In a way feminism has always existed, even if the term was not always around. My belief is that feminism is shaped by society, by history and by people’s contexts.”

In an article that you wrote for the Guardian in 2012, you describe your decision for wearing the headscarf as a feminist, political statement. How do you feel about this today?
“I was actually reading that article on the way here and there are massive chunks that I would rewrite now. Looking back I see it as not being nuanced enough, but what was going through my head was partly pushed by my academic studies, gender studies, research on the sex trade and looking at the way consumer capitalism exploits women’s bodies to sell products and make profit. I might have been angry when I wrote it but I was young, rebellious and I kind of wanted to piss people off. My thinking was that if society expects me to uncover than I’m going to do the opposite. In this way the headscarf really spoke to me and I feel that it’s not just a religious symbol but that it speaks to a wider system. I’ve never been convinced that … [Read the entire article in Freya magazine]